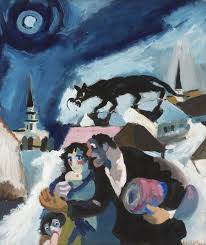 Last month I visited the Ben Uri exhibition on Smith Square, Westminster. The exhibition was ‘Art Exit: 1939 A Very Different Europe’. The aim of this exhibition was to shed a light on the experiences of those who were vilified in Europe 80 years ago.Walking through this exhibition, one is able to get a sense of the sheer fear and anguish that some of these artists, who were fleeing oppression, felt at this time.

Whilst all of the pieces were both touching and thought-provoking in their own right, the painting that intrigued me the most was “Refugees” by Josef Herman.

Herman was born in Warsaw, Poland. He was forced to flee his native land in 1938 due to the rising Nazi oppression of Jews. After staying in France for two years he began his new life in the Welsh mining village of Ystradgynlais, whilst his hometown was being torn apart by the Nazis.

Back in his hometown, some of his family were not so lucky and did not escape as refugees, like Herman. It has been said, that the girl in this picture, may represent Herman’s sister. David Herman, Josef’s son, recently explained the resemblance between the woman painted and his aunt: “These people bare uncanny resemblance to my father’s sister, who he painted in a family portrait,” Herman said. “His family, including his sister were not refugees, they were left behind in Poland to be killed by the Nazis.”

The painting that David Herman is referring to is titled, “My Family and I”, also done in 1941.

Perhaps this painting expressed Josef Herman’s wish for his sister to have emigrated to Britain with him.

Herman’s own experience of fleeing the ever-growing threats of anti-Semitism in Poland and Belgium, enabled him to perfectly paint the scene of horror and potential bloodshed seen in this painting.

The theme of terror is amplified by the dark and dreary navy backdrop. Snow covers the streets. The refugees in this painting were in dark, cold place, literally too.

What’s more the child in the bottom left has a facial expression reminiscent of “Saturn Devouring His Son” by Francisco Goya (as said in the painting description). The allusion to the dark and gruesome artwork of Goya, truly displays the horrific content and context in which this painting was produced. The world of Goya’s paintings were laws and morals are abandoned, as a father recklessly and barbarically tears the head of his own son, is also etched into Herman’ painting. Similarly, here laws and morals seem to have been abandoned, as people are no longer seen as such. Like Saturn, the Nazis are seen to be barbaric and reckless.

Another important feature of this painting is the inclusion of the black cat. It can be seen on a rooftop behind the refugees, with a dead mouse held in its mouth, blood dripping ominously. Herman’s use of the cat killing the mouse, precedes the death of million of Jews, like Herman’s sister, at the hands of the Nazis.

Interestingly, Herman also chose to use a black cat in his portrait “My Family and I”. This time the black cat lurks on the windowsill, but with no dead mouse drooping from its clench. The consistent use of the black cat is strange and would seem not to be a mere coincidence. So why would Herman paint a black cat in two paintings, when they depict vastly different scenes.

Does the black cat demonstrate the effervescent Nazi menace, which is always present, but which may at times slip into the background? Or does the black cat simply meant to be a figure of luck and superstition. Potentially pointing to how Herman was lucky to escape, and his sister not. Whatever the answer, it sparks up a variety of questions. 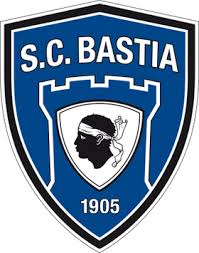 SC Bastia are a French club based in Bastia, situated on the island of Corsica, which is located southeast of the French mainland. Despite the club playing in Ligue 1 in 2017, they now find themselves plying their trade in the Championnat National 3 (French 5th division). This was enforced by the French Football federation, following the club’s financial difficulties. The club’s current plight is an antithesis to the success of the Corsican club’s golden period in the late 70s, when they reached the UEFA Cup final, eventually losing out to Dutch side, PSV.

Unsurprisingly, most of Bastia’s fans are Corsicans- they often display their independence. For some in overly adverse ways. Many Bastia fans booed La Marseillaise (French national anthem) before the 2002 Coupe de France final. There seems to be a divide between the Corsicans and mainland France.

This divide, and a history of struggle can be seen through the club’s badge. The current version depicts a moor’s head with a white bandage (or necklace) wrapped tightly around the forehead, tied together by a knot below the temple. Behind the moor’s head is an outline of a castle, which is surrounded by blue. The castle represents the Castello di Bastia, but what is of more significance is the iconic moor’s head. This same head can be found on the badge of Bastia’s neighbouring clubs, also found in Corsica- Gazélec Ajaccio and AC Ajaccio (as well as that of Cagilari FC, found in Sardinia, displaying the close links Corsica has to Italy). Whilst there may be a competitive rivalry amongst the three French teams to be able to claim that the each is the dominant football team of Corsica, it seems as if they are more united with each other more than with mainland France. The answer for this lies in the history of Corsica. In 1729 the Corsican Revolution began, in an attempt to break free from the rule of Genoa, Italy. Directed by Luiggi Giafferi and Giacinto Paoli, and then by Paoli’s son, Pasquale Paoli. In 1755 the Corsican republic finally claimed it independence, and it remained such until 1769, when the island was once more conquered, this time by France. In 1760, General Pasquale Paoli ordered the necklace to be removed from the head and the blindfold raised above the eyes- the position of the necklace now. His reason, reported by his biographers, was that: ‘The Corsicans want to see clearly. Freedom must walk by the torch of philosophy. Won’t they say that we fear the light?’. Paoli was issuing a call for Corsican defiance and freedom, something that still rings true to this day. There is even a militant group- the National Liberation Front of Corsica (FLNC), which pushes violent action for Corsican nationalism.

The moor then is clearly important for Bastia in the way it represents freedom and independence for the island- it has featured on the SC Bastia badge since the 1980s, and one would think it is not going anywhere soon.

Recently, the club has found itself in trouble with the French Football Federation. In 2017 ultras invaded the pitch during a home game against Lyon, where several of the visiting team’s players were attacked. As a result the team were handed an automatic loss, the club’s supporters were banned from travelling for Bastia’s next three away games and Bastia’s director Anthony Agostini was suspended for six months. Significantly, this happened in the home game following Bastia playing behind closed doors, as Nice’s Mario Balotelli was subject to racist abuse. Whether this is an ill-mannered and barbaric call for Bastia and Corsica’s independence, or just the mindless act of a minority of ultras, there seems to be a deep divide between Bastia and France, one that can be traced back to the rebellious image of the moor’s head fixed on Bastia’s badge.