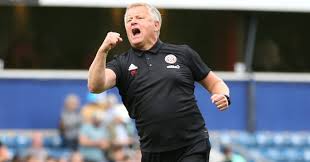 Last weekend Sheffield United came back from two goals down to gain a heroic 2-2 draw with Chelsea at Stamford Bridge. It left the club with a respectable five points from their opening four games, following a win against Crystal Palace and another draw away to Bournemouth. Sheffield United’s progressive tactics have played a big part in their results so far this season.

Chris Wilder has lined ‘The Blades’ up in a 3-5-2 formation this season, when going forward this formation fuses into a 3-3-2-2. Wilder has adopted this set up so the team can maintain triangular patterns across the right and left sides of the pitch, enabling the man on the ball to always have a passing option available. A crucial aspect of this system is the use of overlapping centre-backs, who can often be found in the right and left wing-back roles.

Of course, if Sheffield United lose the ball in the attacking third, then they are vulnerable to the counter-attack as their centre-backs push on. As a result, they aim to win the ball back or, at least stop the opposition from attacking as soon as they lose the ball. Sheffield United have committed 57 fouls, only Crystal Palace (60) have committed more fouls this season. If they do win the ball back though, Sheffield United are able to reignite their attack, and this has been something that they have been successful at so far. At the end of gameweek four, no team starts their attacks higher up the pitch than Sheffield United, with a higher press than the likes of Man City, Tottenham and Liverpool.

The fluidity and ingenuity of Wilder’s system have led Sheffield United to two promotions in the last three years. Not only has the club improved significantly under Wilder’s tenure, but it is also clear to see that they play an attractive brand of football. Since the 2016/17, only Pep Guardiola has accumulated more points in the English Football League than Chris Wilder.

However, Sheffield United’s success and style of play has been not only downplayed, but actually attacked by the British media. Before the season even began, ex-Man City full-back Danny Mills, most famously remembered for being left red-faced by Thierry Henry at Anfield, suggested that Sheffield United would struggle this season. “They’ll be similar to Cardiff,” stated Mills, “it’s not the most glamourous way of playing. They might play a little direct at times.”

The comparison to Cardiff is baffling and insulting to Wilder’s way of playing. Whilst, the two clubs spent similar amounts of money in the Premier League, Sheffield United aim to keep the ball on the ground, and, as we have seen press incredibly high up the pitch, an antithetical way of playing, when compared to Neil Warnock’s tow flat banks of four tactics at Cardiff. Obviously, Mills had not done his research, it is questionable whether he had ever watched Sheffield United in either League 1 or the Championship before offering his ‘hot-take’.

Likewise, Garth Crookes belittled Sheffield United last Saturday, during their match against Chelsea. Crookes predicted that Sheffield United would struggle this season. A fair assessment potentially considering the club’s perceived lack of renowned Premier League goalscorers. However, his insight on United’s play was less fair. “Their style of football is quite basic for the Premier League”. Despite, claiming to watch Sheffield United three times this season, the ex-Tottenham man dismissed Wilder and his progressive tactics. Crookes failed to take note of the club’s high-press, novel use of centre-backs in the wing-back role, or the fluidity of their players in the attacking areas.

We have seen already, two criticisms not only of Sheffield United’s quality, but also their style of play. So why do British pundits fail to recognise they obvious heroic achievement by Wilder, an English manager. And the manner in which Sheffield United have achieved success, with a brand of progressive and attack-minded football?

Perhaps the answer opens up more on the consequences that are attached to the way that football, and 21st century life are progressing. It is fanciful to suggest that Mills and Crookes have watched much of Sheffield United, even if they claim to do so. Their opinion is based of what they ‘think’ is true. In the case of Mills, this may be a lingering attachment in his head between Sheffield United now, and Sheffield United when they were last in the Premier League. After all, their manager then, Neil Warnock is the Cardiff manager now, thus explaining the ‘similarities’ between Sheffield United and Cardiff. However, that was in the 2006/07 season, nearing on 15 years ago. The club have been transformed since, and any opinion that links Sheffield United now, to the team when they were last in the Premier League is both false and bemusing.

Crookes opinion on Sheffield United’s ‘basic’ style of play is a reflection of a wider problem in football punditry today. Sheffield United don’t hold the financial capabilities of the likes of Man City and Liverpool. They do not hold the same calibre of player. The club and the results are instead built of Wilder’s tactics and the belief in the ethos that the ‘whole is greater than the sum of its parts’.

Invariably now, discussions on popular broadcasting channels such as BT Sport’s ‘Gone in 60 seconds’ or Sky Sports ‘The Debate’ feature debates over the Top 6 and VAR, but constantly cascade the equally important tales, such as Wilder’s Sheffield United.

This is indicative of the obsession with topics surrounding money, or ‘quick’ debates, such as ‘was that VAR decision correct?’ No longer, are there discussions actually on football, and the way it is played, especially amongst the less popular teams in the Premier League.

Mills and Crookes may have coagulated Sheffield United now with Sheffield United from 2006. Or they have no real interest in Sheffield United, or the way the play football, as they are not a ‘Top 6’ club, they do not have limitless financial backing, and their manager isn’t a Dutchman that plays an attacking 4-3-3. Their clear disinterest with the story of a club that doesn’t have a £500 million costing starting XI displays both how some pundits fail to actually watch football that does not involve the elite clubs, and how their perceptions of teams revolve around the ‘glamour’ of finance.